Simone Forti﻿
"The liveliest of the original mavericks of postmodern dance.”               - New Yorker Magazine, 2001
Sarah has been working with Simone Forti since 1998, exploring improvisations, writing, and performing. Together with improvisation artist Luke Johnson and musician/composer Douglas Wadle, they collaborated on five evening length works, performing together as The Sleeves in Los Angeles. Their anthology, Unbuttoned Sleeves, was published by Beyond Baroque in 2006, edited by Fred Dewey. Watch joyland, a solo created for Simone by Sarah from To Borrow Salt.
Sarah performs News Animations and classic solos by Simone Forti. 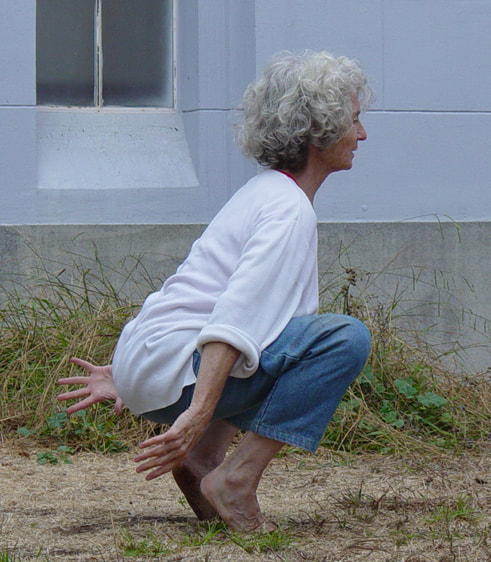 Photo by Sarah Swenson, 2004
Simone Forti - a rain or shine backyard performance - October 17, 2004 4 PM
Venice – Simone Forti and guests graced the front and back yards of the Beyond Baroque Literary Center on Sunday
afternoon, with selections from Forti’s repertoire spanning four decades.  Surrounded by loyal fans, friends, and other
artists,  the program began with Huddle (1961), a living, moving sculpture, performed with necessary concentration and
agility by regular attendees of Forti’s Friday afternoon Logomotion workshop.  Moving to the backyard, Forti continued with
her 1975 improvisational solo, Striding Crawling, based on her observation and exploration of the movements of other
species.  Using her trademark Logomotion form, Ms. Forti occasionally spoke while moving, commenting on the quality, shape
and motivation of various animals; her embodiment of birds was particularly lovely and evocative.  See Saw (1960) was
performed by local choreographer Carmela Hermann and video artist Andre Andreev.  This structured improvisational
relationship set atop an actual see saw, elicited anticipation from the viewers and developed nicely with a sense of tension,
finding a calm resolution.  The program concluded with one of Ms. Forti’s ongoing News Animations - this one commenced
with her struggle to unfold a representation of an American flag and to lie uncomfortably beneath it.  Very moving, and often
humorous, Forti uttered a stream of consciousness dealing with militarism, the meaning of home, life in the garden, and the
heartbreaking toughness and fragility of our existence.  Soon to be 70 years old, Simone Forti was a beauty this overcast
afternoon, moving with compelling freedom and honesty from her heart, soul and very vibrant consciousness.
-Sarah Swenson